Volkswagen of America is collaborating with the Tennessee Valley Authority as the utility corporation sets a goal of operating a 100% percent electric sedan and SUV fleet by the year 2030. Headquartered in Knoxville, Tennessee, TVA’s service area covers all of Tennessee, portions of Alabama, Mississippi and Kentucky, and small areas of Georgia, North Carolina and Virginia.

“Electricity is the clean, low-cost, reliable fuel that will decarbonize our nation’s transportation network,” said Don Moul, TVA Executive Vice President and COO. “TVA is on the leading edge of electric vehicle adoption, and with partners like Volkswagen we are moving farther and faster together to accelerate the use of electricity in all sectors of the economy to make our carbon-free vision a reality.”

In pursuit of its goal, TVA intends to replace its carbon emitting vehicle fleet with nearly 400 light-duty and 800 medium-duty EVs, along with the addition of more than 300 charging stations at TVA locations. As one of its early steps, the utility provider has chosen to collaborate with Volkswagen on a year-long test using its ID.4 EV to analyze capabilities and various applications of vehicle usage. 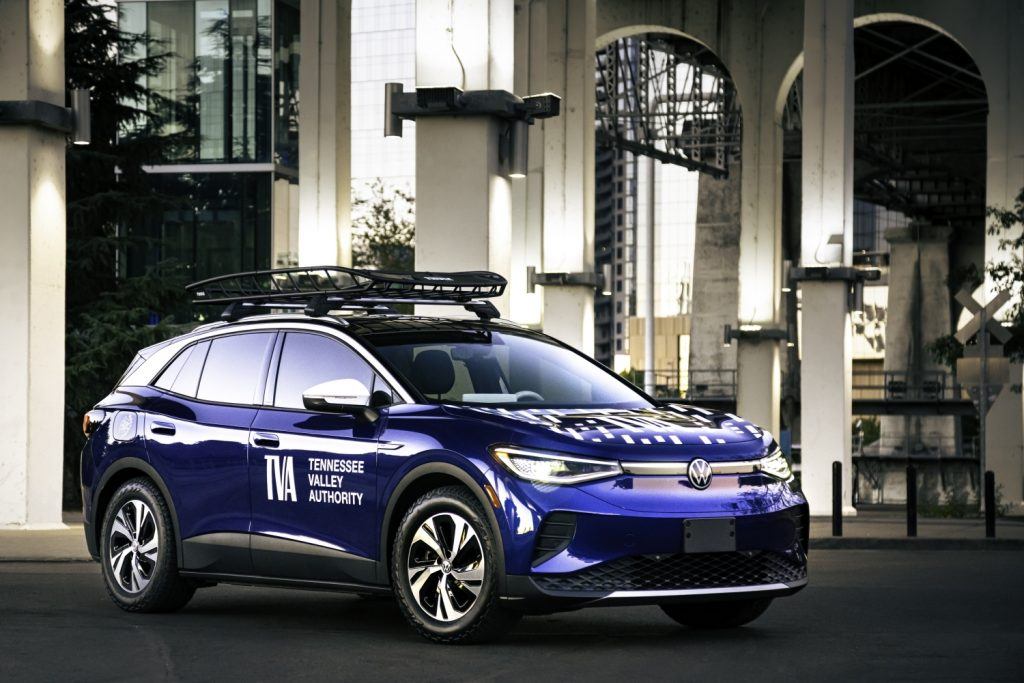 As part of this test, Volkswagen will modify a production vehicle and temporarily loan TVA an ID.4 SUV enhanced with Volkswagen components and third-party accessories. This vehicle, a “Mobile Drone Response Vehicle,” equips TVA test drivers for a number of real-world response scenarios. Featuring a trunk-housed custom storage unit for drone and field equipment, the vehicle will also be outfitted with a portable power station. Versatility gets a boost by way of a Thule Caprock platform roof rack, supplemented with a Thule retractable side awning. Eighteen-inch wheels and all-terrain tires unlock new roads for the SUV, while a heavy-duty suspension aids in hauling the weight of additional equipment. A full-display digital rearview mirror ensures optimal visibility for the vehicle’s operator. The Mobile Drone Response Vehicle will debut at the 2022 SEMA Show in Las Vegas, NV on November 1st, on the Volkswagen booth (#10509).

To celebrate the partnership, Volkswagen also revealed a second ID.4 vehicle that features an eye-catching exterior graphics package designed to boost visibility of the test fleet program. Equipped with 18”-inch wheels that are wrapped in rugged treaded tires, the all-electric SUV is also outfitted with Volkswagen roof carrier bars and a Thule brand Canyon Roof Basket.

“TVA has a long history of innovation, and we’re thrilled to collaborate with them in their transition to a fully-electrified fleet,” said Hein Schafer, Senior Vice President Product Marketing & Strategy, Volkswagen of America. “This effort is leading by example, and with the aid of our ID.4 vehicles, stands to show industry how viable EVs are in fleet applications.”

The partnership is not the first time TVA has involved Volkswagen vehicles in e-mobility research. In March of 1978, the Electric Power Research Institute, EPRI, selected TVA as the host utility company to perform field-testing and demonstration of electric vehicles; Research Project RP 1136-5. Five Volkswagen Kombi vans and five 8-passenger buses were purchased from Volkswagen. In entirety, VW produced about 70 electric vans for fleet research purposes. The design of the electric Kombis and Buses used in the project were based on the production Type 2.

The ID.4 is Volkswagen’s first all-electric SUV and the brand’s first global EV. Built on Volkswagen’s MEB electric vehicle architecture—the modular electric drive matrix—it marries the strengths of a purpose-built EV with performance, packaging, and value features that have marked the brand for decades. The ID.4 competes in the world’s largest market segment—compact SUVs—and is currently produced in Germany, China, and at VW’s Chattanooga, Tenn. assembly facility with deliveries due to start later this year.